A series of school bus accidents in New York City over the past two years now includes news of a September 16 crash in Queens, New York. The most recent incident occurred at approximately 7:20 a.m. at 183rd Street and Liberty Avenue. The queens personal injury attorneys at Pulvers, Pulvers, Thompson & Friedmna discuss the accident below. 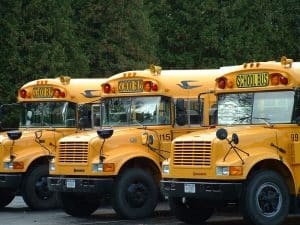 There was no immediate information about just how the crash occurred, but 11 individuals were reported to have been hurt. Two children and nine adults were transported to a local hospital with what were described as non-life-threatening injuries. However, WABC reported that two people did end up with injuries that were described as serious.

This is the second significant accident involving a school bus in New York City since the new school year resumed on September 4, 2014. Only days ago, two school buses collided in the Bronx, and 27 children were hurt. Last March, a taxi and a school bus were in a collision that injured nine. A Brooklyn school bus crash in December resulted in injuries to four people. The October prior to that, a Staten Island school bus crash injured eight. These victims were injured because of someone else’s negligence. This is why it is important to consider talking to a Queens personal injury attorney.

One of the safety concerns has been the alleged lack of experience on the part of some school bus drivers. Recently, in August, the New York City Council designated $42 million to reward experienced bus drivers with higher pay. At the time, Mayor de Blasio applauded the effort as he cited a correlation between bus driving experience and student safety.

The New York City Police Department is now involved in an ongoing investigation into the September 16 Queens bus accident.

When you or a loved one is injured in a bus accident or any other type of vehicular collision, a Queens personal injury lawyer can provide assistance so that compensation might be sought as provided for by state law. When negligent driving or an unsafe vehicle contributes to an accident, the law provides an opportunity to seek a monetary award related to medical expenses, possible lost wages, pain and suffering and other potential costs. For further help, please contact Pulvers, Pulvers, Thompson & Friedman for your free Queens personal injury consultation.