Yesterday both Toyota and Nissan separately announced recalls of their vehicles that had potentially defective airbags installed.  Collectively the automakers recalled nearly seven million vehicles worldwide, with approximately half a million from the US alone.  This new batch of recalls falls on top of the existing Takata Corp recall of twenty-five million vehicles worldwide.  The recalls have been called in the wake of six deaths associated with airbag explosions.  Toyota reported that the defect appeared to involve moisture leaking into the airbag containment area, making the inflators prone to unstable deployment. 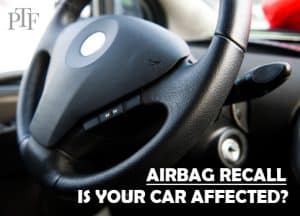 My car is on the defective airbag recall list.
Now what?

1)  Confirm with that your car is part of the recall.  The easiest way to do this is by visiting safecar.gov and entering your car’s VIN when asked.  The VIN is usually stamped on the doorjamb of the driver side door when the door is open.  On some vehicles, it is also located on the dashboard behind the steering wheel, visible when looking through the windshield from outside the car.

3)  Be proactive!  Once you know for certain that your car has a potentially defective part in it, get it fixed as soon as possible.